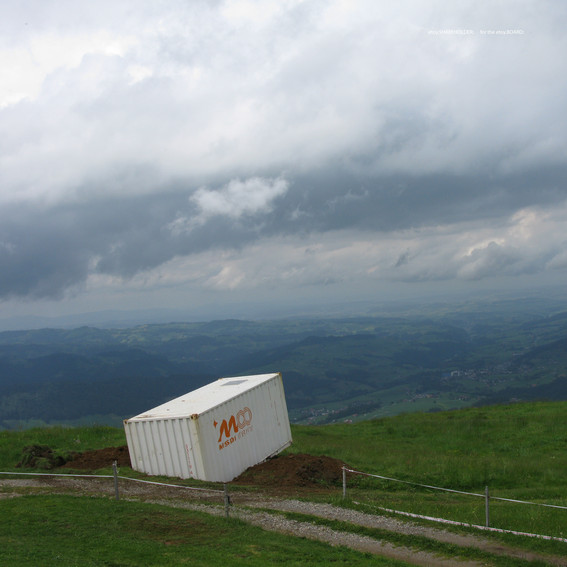 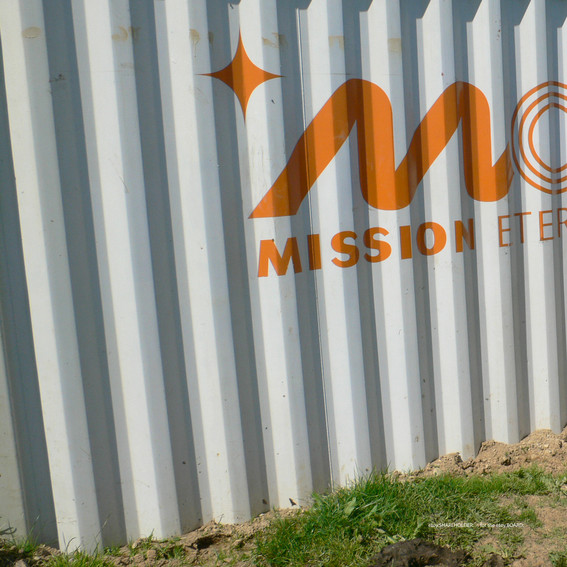 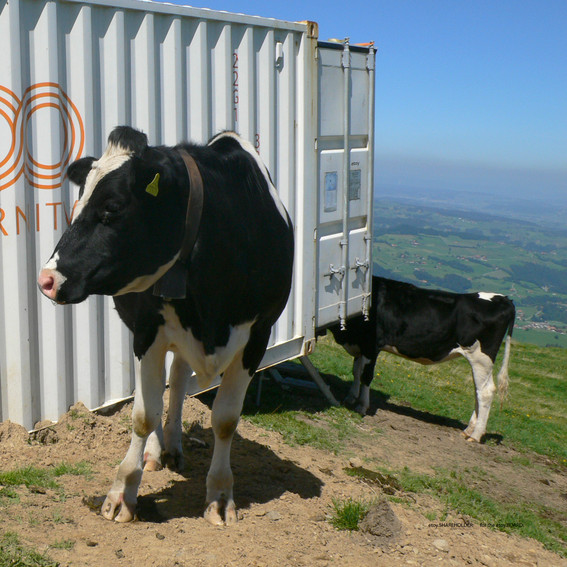 From the 5th of July 2009 to the 20th September 2009 the etoy.SARCOPHAGUS was part of the exhibition "Im Anfang war das Wort" in Heiligkreuz - Entlebuch / Switzerland

Like a stranded comet the etoy.SARCOPHAGUS stucked on top of one of the most spectacular mountains - that has got a view over half switzerland and is meant to be a mystical pilgrimage destination. etoy's MISSION ETERNITY was the end of one hour walk through religion and art: stepping into the moving and blinking pixel container filled with new sounds by MATHON. With their sounds the experience of the SARCOPHAGUS became a complete audio-visual impression.

In August 2009, etoy agents met in Heiligkreuz, Switzerland, for the general meeting and because an outdoor exhibition featured the SARCOPHAGUS on top of the “First” mountain. The gathering of agents was accompanied by a public invitation to join a workshop where agents would assist in encapsulating so-called stowaways for MISSION ETERNITY. Such a setup consciously invites surprises as to the individual(s) who join the workshop. A retired cattle breeder, Hans Kauffman from Eschlotzmatt, joined the workshop as the only candidate. Monorom conducted an absolutely spell-binding interview during more than one hour, a chance that not only allowed us a deep inside into rural life in Entlebuch but also into the beautiful ambitions by this man to share his life’s story, a story full of coincidences, pride, and the merits of diligence and hard work in agriculture. A series of values collided that afternoon. MISSION ETERNITY implemented the gate during that year, a distribution system for content that would be machine-searchable and indelible on the Internet. While the proposition that such a stowaway workshop and the gate would trigger wide interest with our audience in Heiligkreuz clearly failed, this one interviewed revealed the depth and breadth of etoy’s ambitions with MISSION ETERNITY.

The interview created experience. In turn, the experience of listening to Hans Kauffman’s account reinforced the sense that MISSION ETERNITY can in fact trigger wonderful insights into life stories, maybe even an essence, as they manifest in an encounter between the pilot (the stowaway) and the agents. The experience is the data, the scrambled file names, their content, the emotions captured on audio and the deeply emotional reactions of people in the audience that afternoon. From this experience, etoy draws an impulse for change that manifests in following attempts to secure insights and experiment with personal accounts in MISSION ETERNITY. The decision to draw centrally on the voice recordings of Sepp Keiser for the TAMATAR project can be partially attributed to the experience in Heiligkreuz. The liveliness of the account of breeding brown cattle in Escholzmatt inspired awe and apparently thwarted any attempt to medialize the direct experience that became palpable in Kauffman’s voice and gestures. But mediating, capturing, selecting, digitally distributing is what etoy attempts to do with MISSION ETERNITY. Was the attempt valuable at all? How can voice be re-embodied? Why and when is voice more direct than visual data?