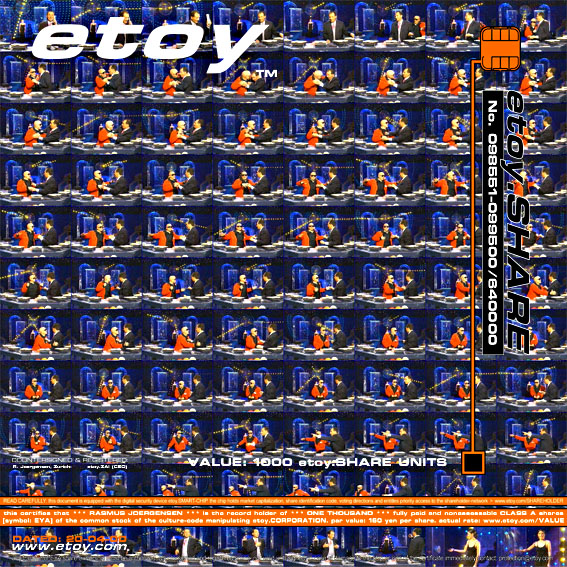 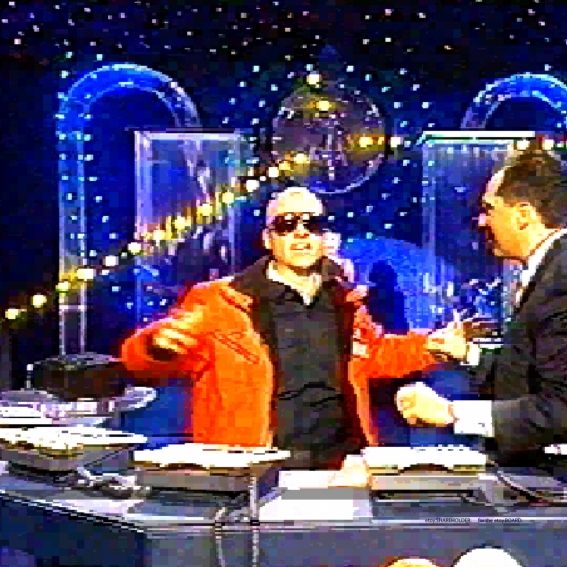 on the quiet saturday evening of december 7th 1996 in switzerland, etoy.AGENTS hijacked the saturday night lottery show BENISSIMO, a live broadcast on national swiss television. after 68 harmless minutes etoy.AGENT e03 blasted some action into the boring TV channel: coming from the back of the audience he jumped on top of the famous show master BERNHARD TURNHEER and asked him how could he find his way out of the TV Channel ... he has to leave this media as fast as possible he cried...and asked the show master if he would like to join him on his way back into the internet...

the incident was a spontaneous etoy.ACTION to promote more coverage in the little alpine country switzerland, the location of one of the etoy.CODING-BRANCHES. insiders believe that this was etoy's revenge on the sleepy swiss population and especially the swiss funding organizations who rejected all the applications from the etoy.CORPORATION: UPLOADING THE VIRUS �toy" directly into the brains of hundreds of thousands of half alive and easily bored television users. HACKING THE CODE. THE SURFACE IS THE CONTENT. this all happened just about one week before etoy won its first award in switzerland (by chance from exactly the same broadcasting institution). for two weeks all the news papers covered the story and helped increasing the hits on the etoy.SERVERS.