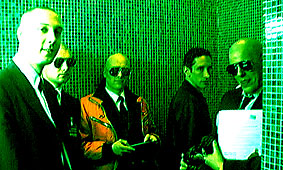 in another three-week meeting in the swiss alps etoy trained the etoy.AGENTS in the use of its highly advanced virtual office system, established further sophisticated etoy.CORPORATE-IDENTITY STANDARDS (the etoy.MANUALS) and worked on expansion strategies in the united states of america.

the new etoy.PACKAGE-SYSTEM allowed the etoy.AGENTS to communicate and work from any point in the world on exactly the same sql / html / java / cgi / php based desktop. a global database system organized, synchronized and updated the work processes of every etoy.AGENT after every mouse click. The etoy.CODE had no longer to be uploaded to the tank system like in the years before: it automatically updated itself in an html environment accessible from any web browser in the world. the only thing the etoy.AGENT had to do since this historical moment was to identify himself by several passwords and verification codes for the different access / control levels.

etoy.PACKAGES developed at the ETH in zurich is known as one of the first avant-garde database virtual office systems of its kind used in a global art and lifestyle context.