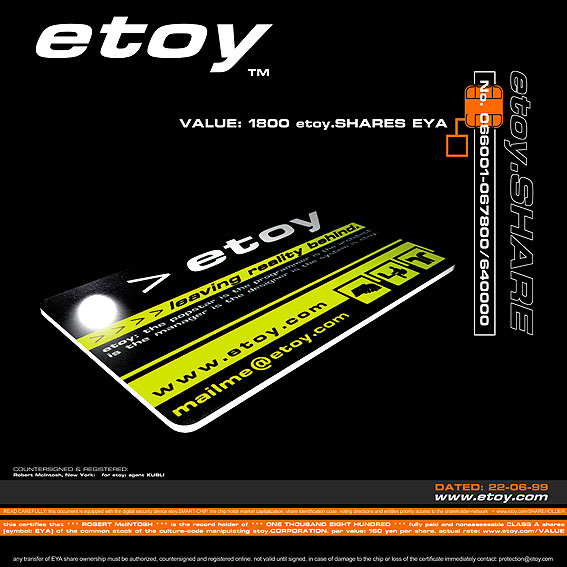 to finance the biggest enterprise in the etoy.HISTORY, the construction of 4 etoy.CARGO-TANKS, the etoy.CORPORATION started to sell etoy.SHARES to public investors, art collectors and fans world-wide.

the official etoy.SHARE campaign started on January 25th 1998 in vienna/austria with a press conference at the office of the austrian chancellor VIKTOR KLIMA. he bought and signed the first etoy.SHARES for the austrian art collection "ARTOTHEK" (totalling 6000 etoy.SHARES symbol EYA on 5 share certificates).

with their investments the etoy.SHAREHOLDERS feed the media virus (they support the etoy.ACTIONS, etoy.ATTACKS and WORLD WIDE CULTURAL OPERATIONS) and keep etoy alive. at the same time the investors are a part of the spread generated by the virus.

etoy.SHARE is a high risk investment with the prospect of profit in cultural values. "etoy.SHARE" is a radical transformation of art ownership in the digital age. The rigidly limited number of etoy.STOCKS available on the market replace the idea of the (physical) original art master piece. The art- and culture value etoy is limited to 640.000 etoy.SHARES (equals 100% of the etoy.CORPORATION). The etoy.SHARES are officially traded by the symbols: EYA (CLASS A, unique, high quality certificates, laminated / mounted on aluminum) and EYM (etoy.MICRO-SHARES on magnetic code cards).

*etoy.DISCLAIMER#0.2.1
"etoy.SHARES" are a revolutionary art product of the etoy.CORPORATION. this product does not follow the rules of ordinary financial markets at all. investing in etoy is a high risk game. every etoy.SHAREHOLDER is aware of the exclusive nature of the etoy.SHARES. experts do not recommend the etoy.SHARE as save investment for retirement pensions.

*etoy.DISCLAIMER#0.2.2
"etoy.SHARES/PRODUCTS": There are no other etoy.PRODUCTS available on the art market... etoy is the value. The SHARE is the art product.