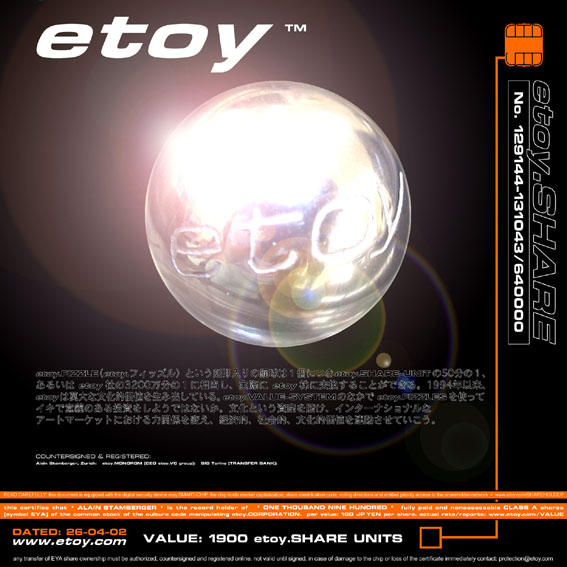 after having regrouped operations and completed a major expansion in personnel, the etoy.CORPORATION started to concentrate on research of alternative currency systems, the advanced exchange of cultural wealth and the successful interaction with the asian market.

while the foundation was laid in late 2000 at the legendary v2.2 MEETING (held in an undisclosed location in the heart of europe), the new etoy.GROOVE found its conceptual culmination in the early summer of 2001 in the city of ljubljana, where the etoy.VALUE-SYSTEM was ratified by the attending core.agents.

the challenge to make the etoy.CORPORATION's cultural wealth accessible on- and offline was met with the introduction of the etoy.FIZZLE, small laser-engraved steel spheres which represent 1/50 of an etoy.SHARE-UNIT. the etoy.FIZZLES served as the official currency at the etoy.EXHIBIT "credit game" at NTT's InterCommunications Center in tokyo (november and december 2001). 10'000 visitors where lured into playful confrontation with the overlap of different value systems: social, cultural, entertainment and, of course, financial values. in japan the same kind of steel spheres are used for the pachinko game, which is synonymous with japan's gambling industry and pop culture but also for shadow currency systems and yakuza related organizations. to be able to enter this market, etoy collaborated with local experts experienced with the pachinko phenomenon. at the same time 8 etoy.AGENTS roamed tokyo in order to open a permanent japan branch.