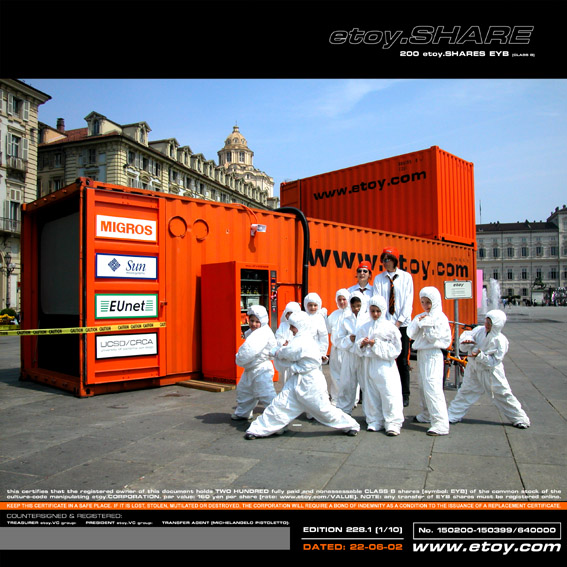 "you will never get this to fly!" - even advisors of the etoy.CORPORATION did not hold back their doubts when etoy.CORE-AGENTS proposed their most daring project so far at a closely contained meeting to a tight circle of etoy.ASSOCIATES and INVESTORS: the plan to develop a new market and a new group of customers - CHILDREN.

for the "Biennale Internazionale Arte Giovane 2002" in torino/italy, the etoy.CORPORATION designed the first version of an etoy.DAY-CARE-CAMP, turning two units of the expanding etoy.TANK-SYSTEM into an educational environment for studying and altering child behaviour in the context of art. etoy collaborates with researchers, care takers, marketers and psychologists in order to develop a long term strategy to manipulate social and cultural value.

for the "BIG SOCIAL GAME" in torino, a test generation of 1'000 kids was trained in digital media production and creating reality. within 4 weeks more than 60 different movie-versions of the etoy.STORY were shot by the kids - each one an individual piece of art and a different point of view.

etoy.DAY-CARE, one more time breaks down the walls of ivory-tower-art, turning the concepts of social interaction and experimental lifestyle into an art installation. the result is a digital playground, production unit and behavioral research laboratory that was highly appreciated by children, visitors and critics.