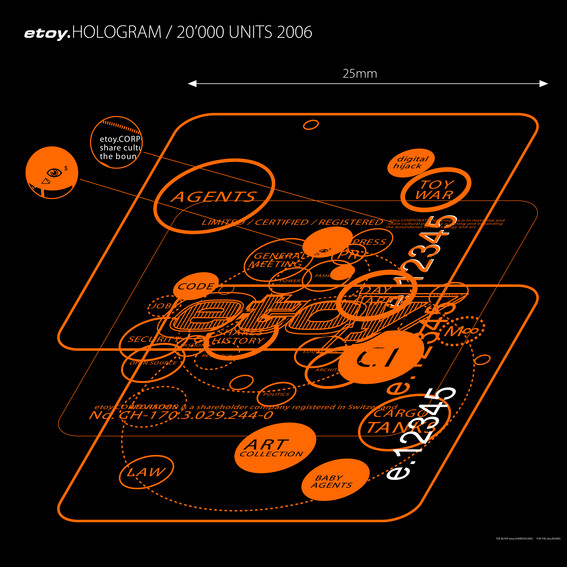 Two members of the etoy.MANAGEMENT present the first the etoy.HOLOGRAM at Centre Pasquart in Bienne. The officially launch of the hologram marks a milestone in the certification and authentication of etoy.ART.

With every line of code, every sculpture, image, publication, exhibition, and award the etoy.BRAND and the body of work produced by collaborating etoy.AGENTS gains value. Today, low-quality plagiarism and counterfeit are a logical consequence of success. Asian brand pirates, greedy artists working for etoy in the past, former husbands and girl friends or art clowns: there are plenty of self-proclaimed etoy.EXPERTS trying to take advantage by offering phony paraphernalia or cruft from etoy.TRASHCAN.

The cutting edge security solution is used to authenticate etoy.SHARE-CERTIFICATES and other objects of etoy.ORIGIN. Each hologram contains micro text, encrypted hidden features, a serial number and holographic elements that are virtually impossible to counterfeit. The etoy.HOLOGRAM is the result of a 6 months collaboration between etoy.IR, graphic designer Brigitte Lampert and the Swiss high tech company 3D-AG - one of the few manufacturers of high security holograms for bank notes, passports etc.

etoy, expanding reality since 1994, redefines art history by replacing the obsolete role of the genius by a network of collaborating agents: a group of exceptional artists and engineers who exploit technology to create and explore new territories. Given these circumstances, the artist's signature and the stroke of the brush are no longer adequate indicators of authorship and authenticity. Watch out for the etoy.HOLOGRAM - the only valid proof of etoy.ORIGIN. Physical products (i.e. etoy.SHARE-CERTIFICATES) that lack the 25 x 25 mm label are low quality replica that can compromise your intellect and sanity. They are worthless.