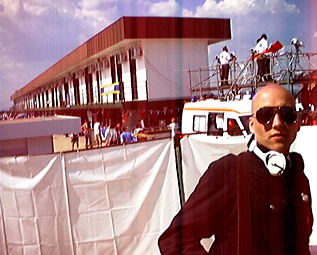 etoy developed its first 100% virtual platform to enjoy sounds for the media art festival VIPER (Lucern). etoy.DIGITAL-DISCO 1.0 was one of the first VRML based codes presented on an SGI in the media art scene.

along with this VRML installation etoy presented the performance WORDWAR from etoy.BRAINHARD, radical sampling of text elements, strobe lights and aggressive behavior: the technological overdrive and distortion provoked many critics to think that etoy was promoting neo-nazi aesthetics. in a press conference the etoy.CORPORATION had to clarify this point: etoy is a provoking overdrive communication corporation. not every element in our repertoire is to be taken at face value. etoy often visualizes and interprets concepts in a provoking and/or ironic way. the show in lucern was about the power of technology, about being in between the retro aesthetics of a video art festival, the avant-garde streams of the internet and commercial vectors. etoy did and does not support nazi ideas in any way. the corporation sees itself as a pseudo commercial, confusing and creating a disrupting net flash in the boring media art world.