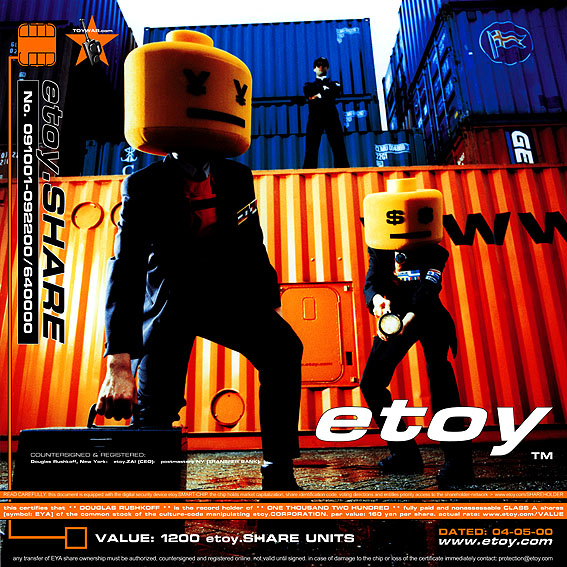 The etoy show which opened Sat at Postmasters is hugely kuel. Anyone in the area should see it. The installation was flawless & how refreshing a whiff of Middle European Rectitude seems in the midst of a phase in socioculture where no one appears to have the faintest effing idea what they´re doing.

Of course one has to have a feeling for International Orange.

Both Isolation Tent & Wall Plaques were well hung, or, if you prefer, "situated". The presentations w/in the tent were reasonably well projected (but there´s a physical agency in gen need of a tech upgrade if there ever was one), & the plaques were done to connote a corporate presentation, which of course is what they were. They were eye-catching, well composed & constructed & used absolutely perfect design metaphors in re styling & text placement. I understand the double-jumbo freight container parked outside was also set up well tho I didn´t make it in.

At the ceremony which followed the opening, the plaques were taken off the walls & brought to a table in the back (formerly holding the bar {monotype, yet well-provisioned}) where they were revealed to be Shares (in case that wasn´t clear), & signed by the ´holders in a brief ceremony recorded by a variety of devices. Whereuponnow"finished"they
were re-hung. Later I was given a nice CD which is itself 5 Shares (now deciding whether to play it or frame it).

The energy was spectacular & there was a fine performance by DJ Spooky after the ceremony. This was the same sort of "buzz in the house" one feels only very rarely at openings -- I was reminded of the last two times something very important had a germanophone cant (in music & painting in the late ´70s & mid 80´s), & while this wasn´t exactly "Kraftwerk meets Kiefer" the feeling wasn´t that foreign.

So much art which deals or attempts to deal w/ "good politics" seems to be based on "Victorian Medicine Paradigm", e.g., "make it taste really bad so they know it´s good for them". Boring, lifeless, positively stultifying assemblages of spent jargon & threadbare theory -- that it is truly reifying to have good, solid "political" art which is also a pleasure to look at as well as a pleasure to contemplate.

Good politics should always be beautiful.
THE THING 2000