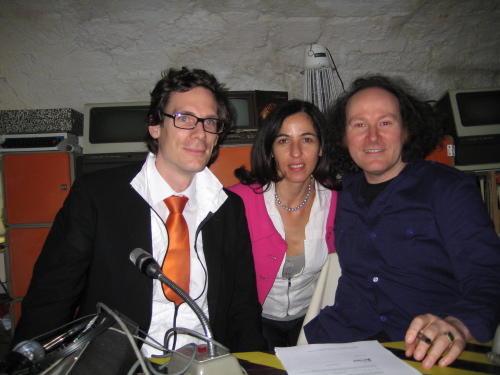 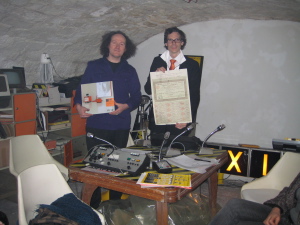 Alliance between etoy and Ouest-Lumière

The Paris conference at Ecole Nationale Supérieure des Beaux-Arts offered etoy the opportunity to interact with researchers of Art&Flux and create the foundation for a future collaboration that makes sense from several perspectives: after the talk we gathered at the secret underground shelter of Ouest-Lumière in the 11ème arr. where we signed a risk sharing agreement and carved out an alliance between Ouest-Lumière and etoy. etoy became a shareholder of Ouest-Lumière and their president Yann Toma became etoy.SHAREHOLDER. The risk sharing agreement included negotiations about an acquisition for the etoy.ART-COLLECTION.
http://ouestlumiere.free.fr/
http://www.ensba.fr/
http://cerap.univ-paris1.fr/spip.php?rubrique36

Art historian Rose Marie Barrientos, artist and entrepreneur Yann Toma and ENSBA cultural program director Jany Louga were fantastic hosts. Yann and Rose Marie are members of the Art&Flux research group at CERAP (Université Sorbonne) where they analyze a current movement of over 100 art companies (entreprises critiques) that seem to work on closing a historical gap between art and commerce that still dominates the mainstream thinking about art as independent and somehow intellectually detached from the lowly grounds of economic logic. etoy has been actively contributing to closing this gap since 1993 and continues to do so: too many artists feel compelled to bite that hand that feeds them, they become cynics over the years and cynicism is rarely the source of creative energy capable of breaking new ground. Besides, it's no fun anyway.

The 2 hour etoy talk entitled "Innnovation durable - une stratégie ultra long terme" focused on the elements of MISSION ETERNITY and the feedback from the audience of art students and researchers helped me view our work from the outside. The discussion showed a keen interest in the financing models etoy uses to sustain large investments for several years and in ethical issues inherent in MISSION ETERNITY (privacy, security, manipulation).

Art companies seem to share a number of features critical for art production including risk sharing, a planning horizon that extend beyond individual constraints, flexibility (e.g. yesterday's two parallel conferences in Basel and Paris with etoy participation), challenges of team integration and evolution, knowledge management, and community building. We continue to look out for synergies and future interactions.